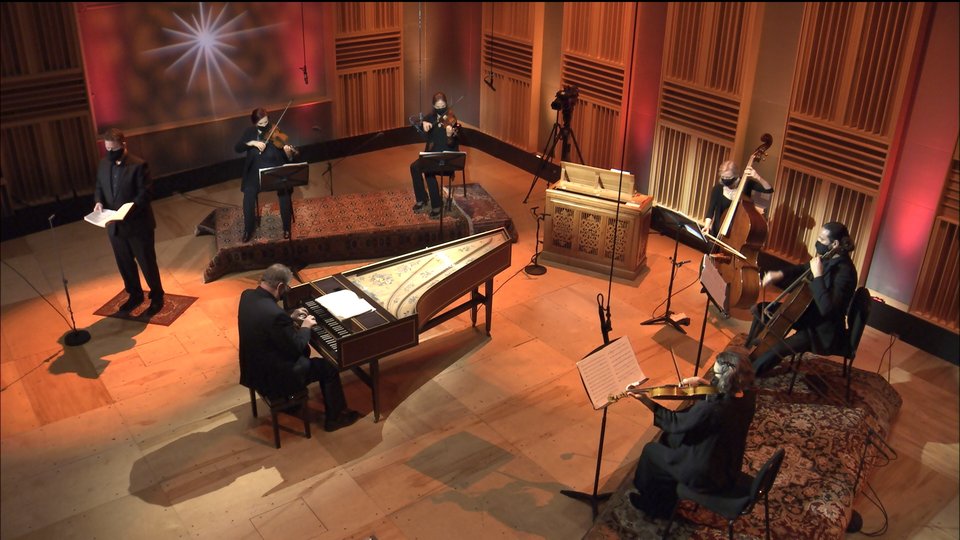 For 166 years Boston’s Handel + Haydn Society had continuously performed “Messiah” each holiday season until the Coronavirus pandemic threatened to end that record in 2020. With the COVID-19 pandemic in full-swing their annual tradition faced cancellation until GBH stepped up to ensure the 167th would go on as scheduled.

The Studio and the OutPost teams from the GBH Production Group had been working non-stop with GBH Radio to safely livestream, record, and edit dozens of musical performances with small groups since the spring of 2020. Handel + Haydn had spent several days recording in the Fraser Performance Studio in late summer and early fall of 2020, and those performances were being edited in our OutPost facility as discussions for a COVID-compliant “Messiah” were taking place.

The production requirements for “Messiah”, however, were more challenging. With 7 orchestra members and multiple groups of 8 singers, this would be well over the limit of 8 performers allowed in the studio at one time. GBH stepped in to make sure the show went on. General Manager of Television, Liz Cheng, General Manager of Music, Anthony Rudel, Senior Director of Production Technology, Tim Mangini, and Senior Studio Operations Manager, Terry Quinn, convened with Handel + Haydn’s President and CEO, David Snead, in early November. A plan was formulated to create a safe haven for musicians and crew members to record this long-running tradition for broadcast on GBH 2, while also streaming on YouTube, Facebook, wgbh.org, classicalWCRB.org, and handelandhaydn.org. 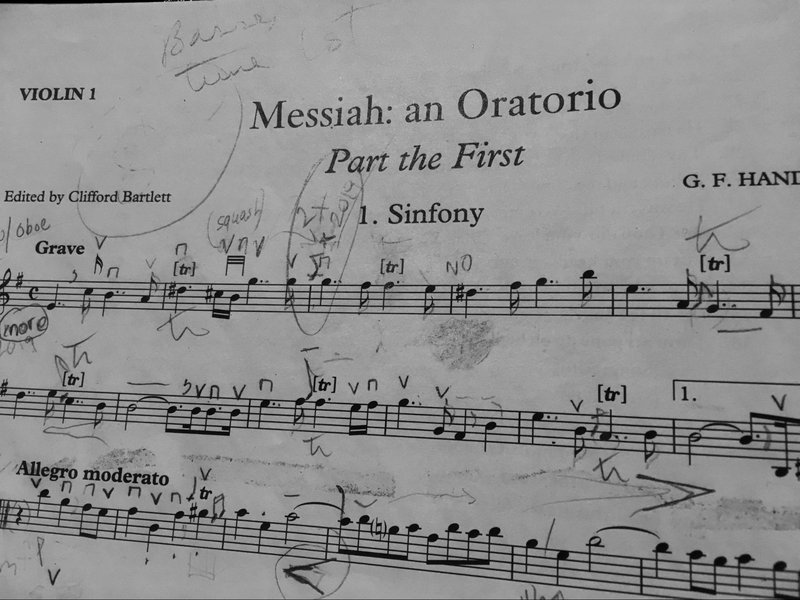 COVID-Safety in Our Studios

Following state protocols and CDC guidelines, the singers and orchestra would be split between two separate studios with breaks built into the daily schedule to allow for complete air exchanges. 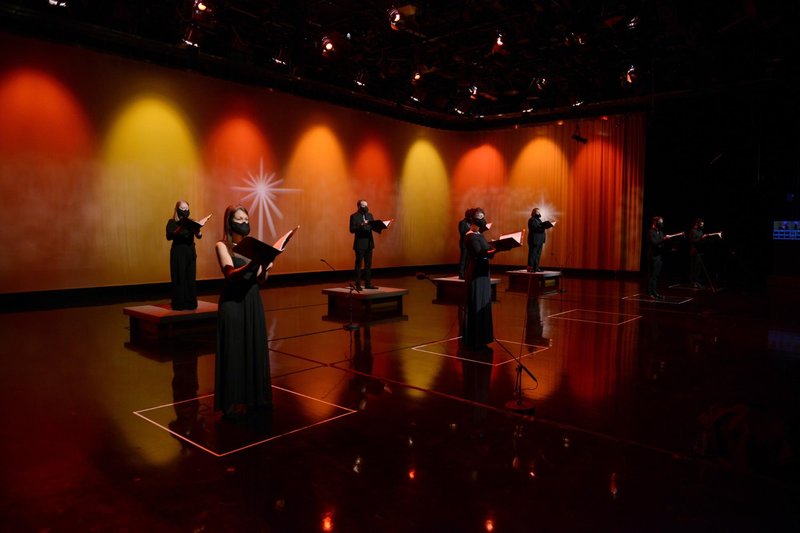 GBH Lighting Director, Phil Reilly, drew up floor plans with singers at 12’ feet apart in the Calderwood Studio and the orchestra at  6’ apart in the Fraser Studio. 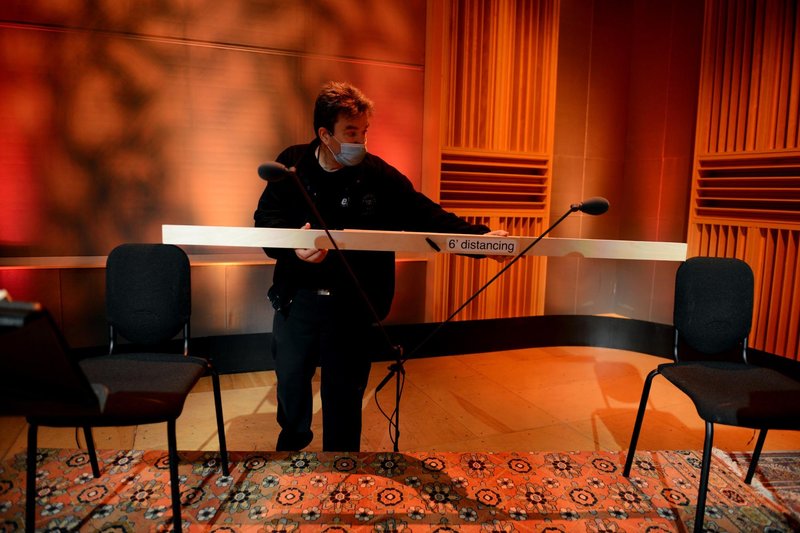 At 4,400 SF, the larger Calderwood Studio would allow for the necessary space between the groups of 8 singers who would be wearing specially-designed masks to contain respiratory droplets. With the Fraser Performance Studio’s 'room within a room' design creating perfect sound isolation and absorption, it would be tapped as home base for the orchestra. 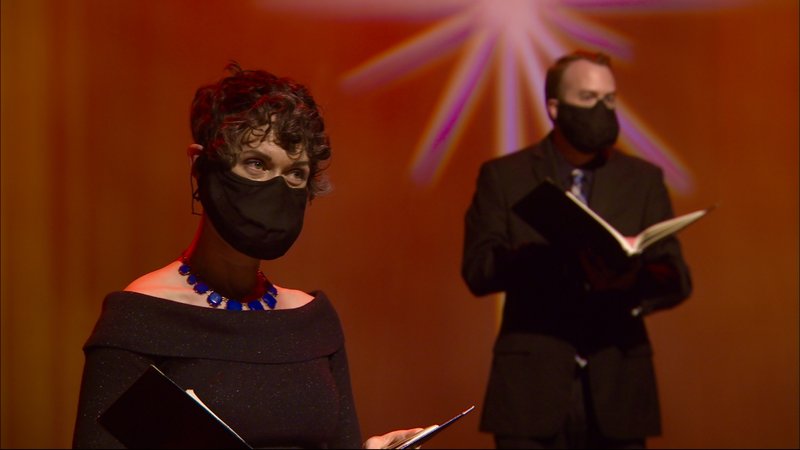 Next, Reilly and his team of Ron Milton, Bob Martin, Howard Powell, and Dan Lang began building the set within each studio, adding risers to create height differentials between performers. Unifying the look between the spaces was achieved by designing with a lighting palette of warm tones and by placing the traditional Star of Bethlehem gobo in strategic locations. Click here to watch a timelapse of the set build.

Director, Bob Comiskey, meticulously planned the shots for each group in each studio utilizing up to 6 robotic cameras which would be remotely operated from a separate control room. With one of the cameras positioned on a scissor lift in Calderwood to provide height and depth, and another high camera rigged in Fraser, the team consulted with OutPost Editor, Arnie Harchik, to confirm that there would be multiple angles for him to choose from for each studio. These overhead camera angles would show the scale of both studios, highlighting the performers from above. 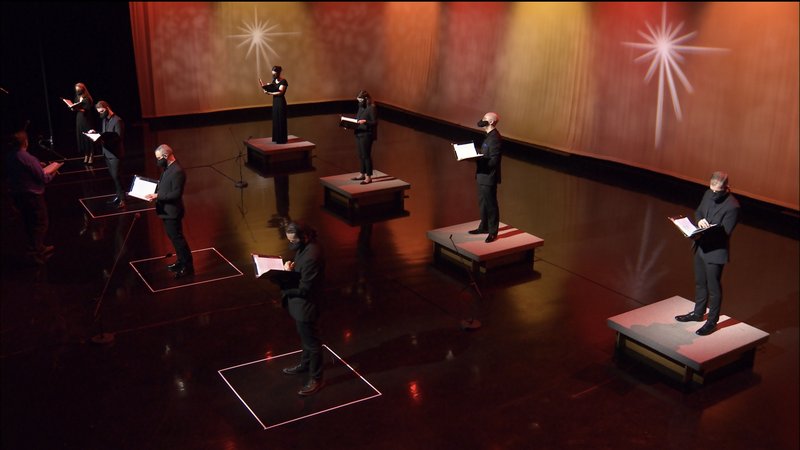 Over the course of three days, the singers and orchestra were split into groups and recorded audio and video in separate sessions. Grammy award-winning Audio Producer, Antonio Oliart Ros, collaborated closely with Lighting Director, Phil Reilly, and Director, Bob Comiskey, on the final placement of musicians. Ros then pre-mixed the orchestral section so that they could be provided as playback reference for the singers when they recorded their segments. Learn more about the challenging process in this behind-the-scenes piece by Daphne Northrop. 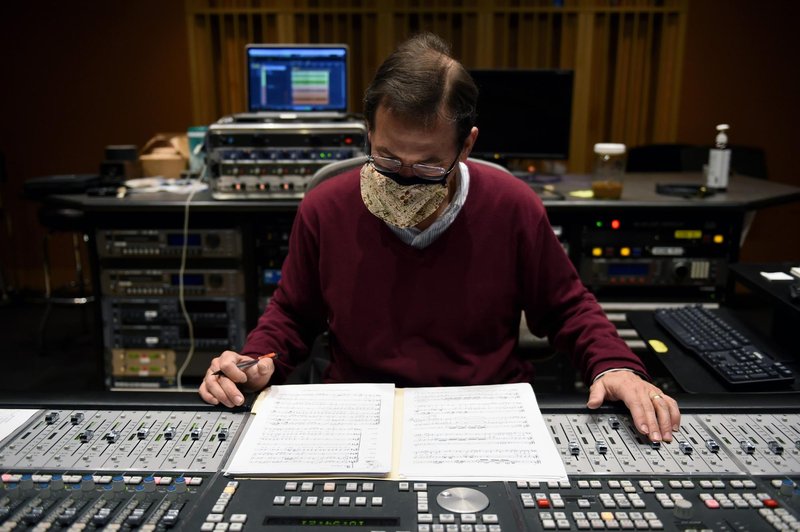 In addition to COVID limitations for performers, the Production Group technical team had been operating since March of 2020 with a small but mighty crew, and the “Messiah” production was no different. In the PCR1 Control Room which normally accommodates eight crew and staff members, Director Bob Comiskey called the shots alongside Senior Technical Director, Bill Francis. 99.5 WCRB Radio Host and Producer, Alan McLellan, served as Score Reader and Associate Director, while Lighting Director, Phil Reilly, separated by plexiglass, operated the lighting console. In yet another control room, Bob Martin operated the robotic cameras along with VTR operators Steve Baracsi, Melanie Flynn, and Eddie Hickey, each tackling one of three days to manage the media for each of the cameras. Behind-the-scenes, Senior Studio Operations Manager, Terry Quinn, and Production Manager, Mary Kate Sandorse, kept the production on-track and running smoothly. 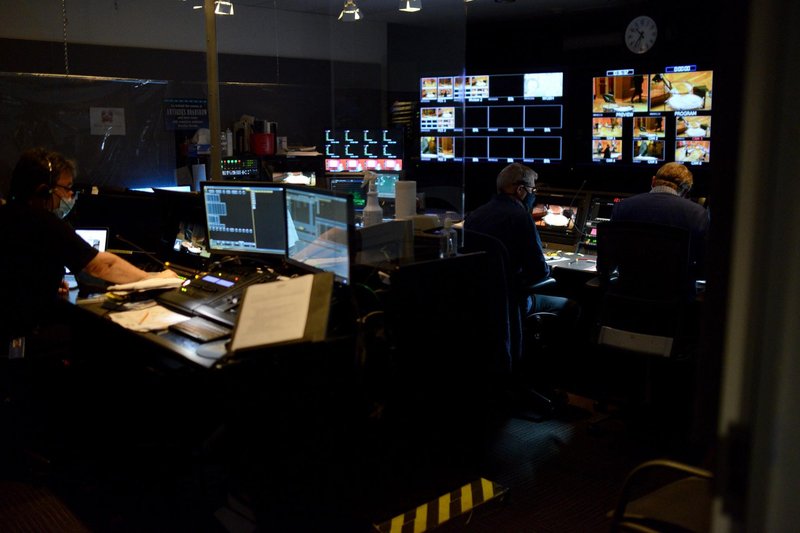 “I don’t think it’s a stretch to say this would have been impossible without all of GBH’s assets.”
David Snead, President and CEO, Handel + Haydn

Once production was finished, the baton was passed to the post-production team at the OutPost. With up to 4 hours of video captured per day from each of the multiple cameras across both studios, Editor Arnie Harchik inherited 4 terabytes of footage.

Working remotely, he started editing on November 21, sorting through footage to create the first pass for the hour-long performance. It took another week of screenings and feedback over Zoom with the director and producers to finalize the second pass. In between, the post team coordinated selects from a mix of b-roll footage showing the courageous work of first responders and highlighting the city of Boston and the New England area.

Harchik recalls, "Organizing and synchronizing the large volume of content was the first challenge. Then creating a piece that matched the beautiful score and captured the emotion and artistry of the event made this the type of project I love to work on." 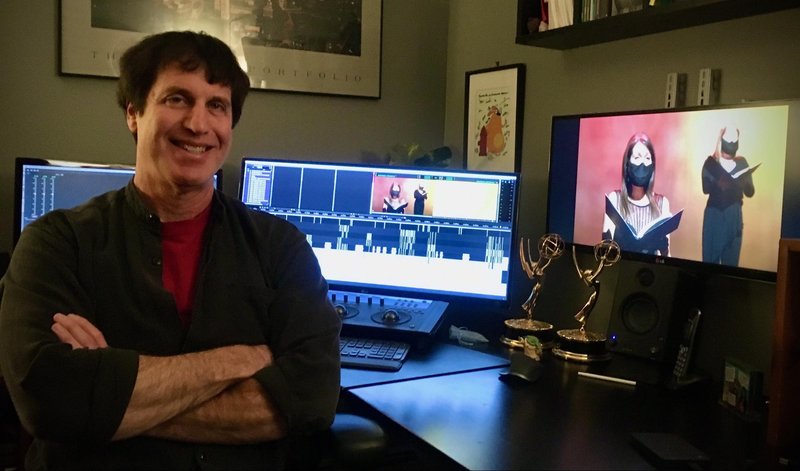 Once editorial decisions were made and the story was locked, the post team moved on to color grading, audio mixing, and packaging, with the final audio mix delivered by Antonio Oliart Ros, and show graphics generated by the GBH Creative team.

Handel’s “Messiah For Our Time" was broadcast and live-streamed on December 20th. It reached over 145,000 viewers across all platforms -- more than 20 times the number that would normally see the concert live in a theater. The combined efforts of GBH Radio, Production Group, and Creative teams in partnership with Handel + Haydn led to the delivery of “Messiah’s” message of hope to a wide audience at a time when it was needed most.

Learn more at Handel + Haydn, including ways to watch the program.

Contact the Production Group for the full menu of production and post-production services.